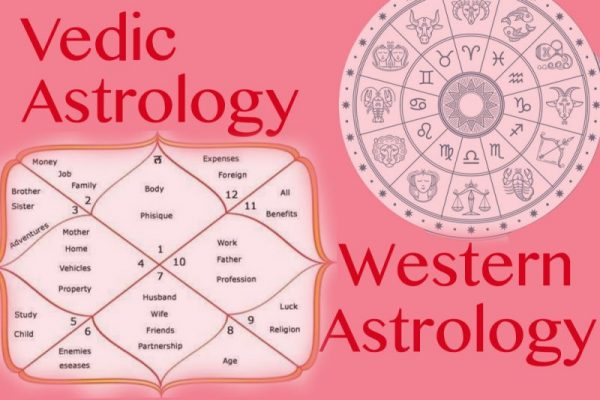 In this article, I will try to give you short summary of the other differences between Western and Vedic astrology

Most modern Western astrologers use one of the many house systems that places the degree of the Ascendant as the beginning of the First House, with either unequally- or equally-sized houses.

Vedic astrologers use Whole Sign Houses, where the Ascendant can fall anywhere in the First House, and each house comprises all of one sign.

Western astrologers use all of the major planets including Uranus, Neptune, and Pluto, and most attribute rulership of Aquarius to Uranus, Pisces to Neptune, and Scorpio to Pluto.

Vedic astrologers, on the other hand, stick to the visible planets, i.e. all the planets till Saturn, using the traditional rulerships, of Aquarius to Saturn, Pisces to Jupiter, and Scorpio to Mars.

in the modern Vedic astrology the outer planets are used only for world predictions. Please note that in my personal readings I pay attention to the outer planets, only if they are closely conjunct to some of the personal planets. In this way the Uranus, Pluto and Neptune will affect your natal chart on higher level

Western astrologers use an assortment of aspects, always including the five Ptolemaic aspects (conjunction, sextile, square, trine, and opposition), with tight orbs of 10 degrees or less, determined by the type of aspect. Planets only aspect other planets and the angles (Ascendant and Midheaven).

Vedic astrologers use a different approach: each planet associates with all planets in the same house, and aspects the opposite house and any planets in that house. Mars, Saturn, and Jupiter also have additional special aspects to both planets and houses.

4- Differences in Approaches and Methodology

Here we can say a lot of differences, most important are :

Some Western astrologers interpret 8 lunar phases, but they generally don’t assess Lunar strength by phase. Vedic astrologers place great importance on Lunar phase, and delineate 30 different Tithis, and consider the Moon as weak when it’s within 72 degrees of the Sun, and strong when within one sign of opposite to the Sun. (They also see the Moon as weaker when waning than when waxing.)

Vedic astrologers consider true planets (Mercury through Saturn) that are within one degree of each other as at war, and this indicates a major weakness. This is not used in Western astrology.

In Vedic astrology, planets get directional strength (Dig Bala) by occupying specific houses: Jupiter & Mercury in the 1st, Moon & Venus in the 4th, Sun & Mars in the 10th, and Saturn in the 7th. Western astrologers do not use this concept.

Mutual reception is used by some Western astrologers and by all Vedic astrologers. In Vedic astrology, it is called a Parivartana yoga, and has extensive interpretive meanings including strengthening planets in both the natal and divisional charts.

While Western astrology recognizes Saturn as challenging, the concept of benefic and malefic planets is employed to a much greater extent in Vedic astrology. E.g. Mercury is benefic unless solely under the influence of other malefics, the Moon is benefic unless within 72 degrees of the Sun, and Jupiter and Venus are always benefic. The Sun, Mars, Saturn, and the Nodes are malefics.

Houses in Western astrology are rarely classified beyond their angularity or lack thereof, and their elemental affiliation. In Vedic astrology, houses are classified by a multitude of criteria including good/bad, upachaya/apachaya (improving or not), kendras & trikonas, marakas, and more.

The rulership of houses is used by some Western astrologers, but is at the core of Vedic astrological interpretation. The analysis of planetary yogas in the Vedic chart relies mainly upon the houses ruled by individual planets and pairs of planets.

Transits, especially by the outer planets, are the main predictive device used by Western astrologers, but some use progressions and/or directions too. Vedic astrologers rely primarily upon the Vimshottari dasa system (cycles and sub-cycles wherein specific natal planets are activated ), and secondarily employ the transits of Jupiter and Saturn (but not the transits by Uranus, Neptune, or Pluto). Some also employ other dasa systems.

Western astrologers  rarely  use the lunar mansions, but Vedic astrologers, who call them Nakshatras, use them for dasa calculation, electional astrology (Muhurta), and for natal work

Nakshatras are my favourite part of Vedic astrology and I will try to give you more information about them – they are fascinating mixture of astrology, beauty and mythology….i just love them

Harmonic charts, called Varga or Divisional charts in Vedic astrology, are essential to natal and predictive analysis in Jyotish, but are unused in Western astrology.

Western astrology is rich in methods of compatibility analysis including examining placement of planets in each other’s houses, inter-aspects (between the charts), and a variety of combined (e.g. Composite) charts.

Vedic compatibility assessment is primarily done by examining the two partner’s Moon positions, examining many Lunar attributes. In addition, the Navamsha chart is used in both in assessing the partner and in timing of relationships (and the changing relationship climate).