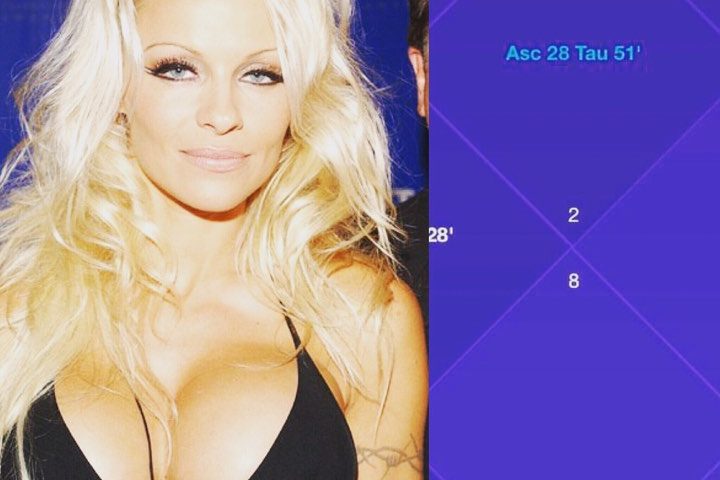 Pamela  Anderson  is a Canadian-American actress and model. Anderson is best known for her appearances in Playboy magazine and for her work on the television series Baywatch and V.I.P.

She is a symbol for sex appeal and success, so that’s why I decided to make a small analysis of her chart

Pamela definitely is one of the most famous people in our generation.  Her success is due to her unique exalted Jupiter. I have noticed that one of the most successful people in TV, newspaper and communication filed have exalted Jupiter in the 3rd house. Pamela Anderson has the same position. the 3rd house is the house of the media, communication, art, courage and effort. Jupiter in Cancer brings a lot of luck and happiness and this combination in Pamela’s chart means she will be very auspicious in spheres like TV, magazines, media. As we all know she became famous due to her naked photos in Playboy magazine and TV series like Baywatch

Pamela has one of the most sexual ascendants -Taurus- and what is more important -the ruler of the Taurus – Venus- is in the sign of Leo. This brings a lot of sexual energy, a lot of glamour, luxury and desire to be seen and recognized. Both Taurus and Leo are signs of art, fame, money and sex. This combination definitely makes Pamela very attractive person

Regarding the plastic surgery – I have noticed that people who have dominant Ardra nakshatra often make a lot of plastic surgeries. Pamela has her Sun in Ardra constellation, For example, Cher has her ascendant in Ardra

Pamela is famous as one of the representatives of the organization People for the Ethical Treatment of Animals -PETA. We can see this from the position of the Moon and Rahu in 12th house – house of the generosity, spirituality, moksha and Saturn in Pisces in 11th house – the house of big organizations

Categories
Go to Top
We use cookies to ensure that we give you the best experience on our website. If you continue to use this site we will assume that you are happy with it.Ok